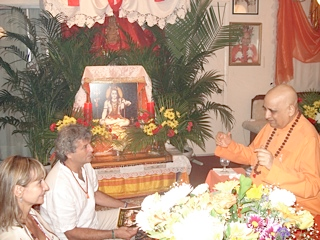 Truly we are very fortunate to have encountered a Guru to guide us on the spiritual path. Even more fortunate still, that he is a true Sadguru. That is to say, an extremely impeccable master, and with such knowledge and wisdom that, with love, patience and erudition, he guides his devotees on particular paths and destinies; giving each what is necessary for their understanding, development, and spiritual progress.

Of course, Swamiji, belongs to that high and distinguished category. He is an extraordinary master, well versed and knowledgeable, an expert in the ancient classical sacred texts of India. He is endowed with an intuitive wisdom, sensitivity and practical knowledge, in a form that is very difficult to find in the world these days.

Swamiji came to the world in Bihar India, 86 years ago, born into a very pious family, with a refined and high spiritual understanding, and in which the figure of Sri Rama presided as the family deity. As is common to the Enlightened Masters, from a very young age he manifested the divine qualities and attributes of a lofty soul who came into the world with the great purpose of guiding and leading many beings, from the path of darkness into the Light.

As a product of his spiritual longing, he arrived at a very young age  to the ashram of Swami Shivananda, in Rishikesh, one of the highest and most renowned saints of India of the last century. Swamiji was initiated in the ancient order of the Sannyasis, and he became a devotee and personal assistant to Swami Shivananda. In this way, the ancient tradition of succession and the transmission of knowledge, between the true Guru and the true disciple, was fulfilled.

Here we would like to highlight the figure of his formidable Guru, Swami Shivananda. He was one of the main propagators and disseminators of yogic philosophy and the teachings of Vedanta, in its different forms, in the Western world. He was also a prolific writer of countless books on spirituality, religion, medicine, ethics, morality, yoga, etc. It was a product of his fervent and strenuous spiritual practices which transformed him from a renowned allopathic doctor into a great physician of soul and spirit, and an unmistakable and celebrated figure in the spiritual world of India of the last century.

He cultivated important relationships and encounters with such extraordinary Beings as Sathya Sai Baba, Sri Ramana Maharshi and Sri Aurobindo. He also encountered many saints, rishis, and legendary sages on his pilgrimage through India. Many masters also visited him at his ashram at Rishikesh, on the banks of the sacred Ganges River. Several aspirants and seekers reached the ultimate goal of Self-realization under his watchful eye, among which we may mention our beloved Swamiji, Swami Satchidananda, Swami Satyananada, and Swami Chinmayananda.

From this Divine relationship between such a colossal master and a devout aspirant, filled with unconditional love, emerged the consular figure of whom we know as Swami Jyotirmayananda; One of the greatest masters incarnated in the world today.

So we can say, that by a blessing from the Divine Hand of God,  Swamiji came to the West to teach Vedantic philosophy, Integral yoga and the great truths of the spiritual world. Since then, he has been tirelessly teaching these teachings for more than 40 years at his beautiful ashram in South Miami, through lectures, talks, retreats and readings on Raja Yoga,  Yoga Vasistha, Mahabharata, Ramayana and other Sacred teachings.

Always accompanied by a refined sense of humor, and in an illuminated, simple, and exemplary manner, he responds to any question of any nature. From the most abstract subjects to simple every day concerns, Swamiji adds an important teaching, anecdote or Spiritual lesson for all who are present.

Swamiji belongs to that class of Master so elevated, that he is able to hide his true spiritual splendor, behind the veil of humility, simplicity and modesty. It really is very rare and unusual to have access to a saint of such high caliber in such a warm, close and personal way, and without having to deal with the crowds and all the paraphernalia that normally surround the Beings of such sublime nature.

8 Years ago we had the good fortune to meet Swamiji, at the very moment we began our relationship. From that day on, our beloved Guru guides us with the affection of the perfect teacher and bestows upon us lofty blessings, giving us the opportunity to live a full, meaningful life, filled with Divine Grace.

Naturally, for the spiritual seeker it is a matter of the utmost importance to find a competent, compassionate Guru with a great understanding of human nature, and a lofty and elevated knowledge and understanding of the sacred scriptures. Logically, the Guru’s grace is proportional and corresponds to the effort, self-control and discipline with which each aspirant leads his life. For ultimately  it is the combination of Grace and self- effort  that will lead the disciple to the ultimate goal of life – Self Realization. Whether in this life, the next or perhaps in the following, this ultimately depends on the effort of each individual.

The great sage Ramakrishna Paramahansa once said that if human beings devoted more of their time to their spiritual practices, and less time to eating, drinking and wasting time in all sorts of trivialities and irrelevant matters, in a few years they would achieve the desired goal of every spiritual seeker.

Swamiji is a Beacon of Divine Light, and naturally fulfills many metaphysical functions, responsibilities and duties, which the Divine entrusts to extraordinary Beings like him. His blessings for the world reach far beyond the important role of Guru that he fulfills  for his beloved devotees and disciples.